Romantic Times said:
Another Baker triumph! Powerful, passionate, and action packed, it will keep readers on the edge of their seats. 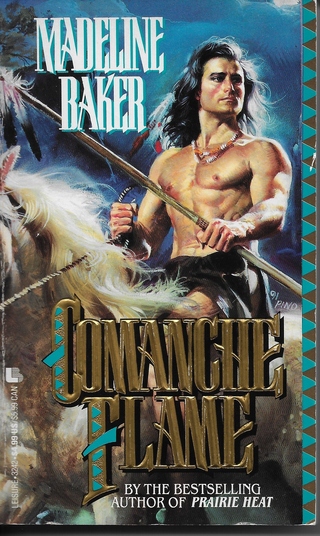 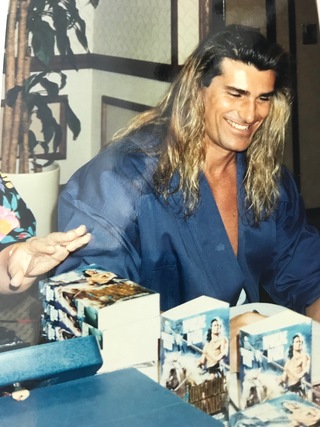 This is Fabio signing copies of Comanche Flame. It was such fun meeting him. 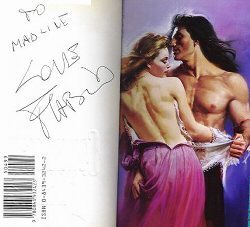 Original Inside Cover
Signed by Fabio!

Over the Backyard Fence said:

Dancer is a bigger than life hero. Jessie is his match, raised in the east with a gentle upbringing she grows into a woman of incredible strength and courage.
The settings are rich and varied including the scene’s in the indian village. There’s some violent scenes and Ms. Baker paints vivid pictures. It’s a fast paced read with believable characters.

This was Ms. Bakers first book. It was written in 1992. I googled her and found that she has a number of books out. I love it when I find a new author and even more when they have a backlist. I’m looking forward to some good stories ." 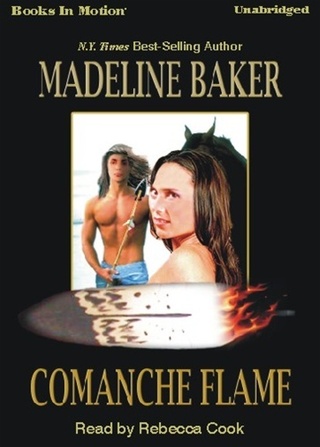 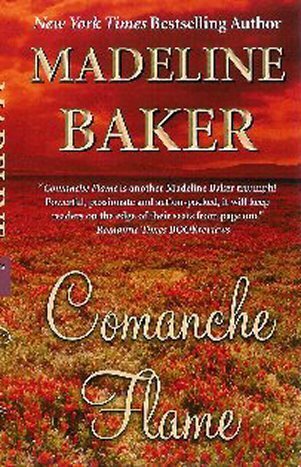 HALF BREED
He was a loner, a drifter, a fast gun whose aura of dangerous virility turned pretty heads all across the West. But if his reputation as an outlaw didn't warn decent women awy, his Comanche blood did.


He saved Jessica's life out on the desolate plains, then made her a willing captive of his savage desire. But even when he had left her behind to rejoin his people, Jesse found she could not forget him. Safe and respectable once again, she longed for her once-in-a-lifetime love, and knew she would give up everything for just one more night of ecstasy with the man called Dancer.

In the press of bodies standing shoulder to shoulder at the polished mahogany bar, one man stood conspicuously alone, one brown-skinned hand draped over the butt of a well-oiled Colt revolver, the other fisted around a glass of the best whiskey the house had to offer.

As new customers entered the hazy, smoke-filled saloon, they invariably headed toward the vacant space beside the solitary man. And after one look into his unfriendly gray eyes, they invariably moved away, seeking more congenial company.

The man smiled wryly as yet another cowhand edged away from him, wondering idly if it was the wrangler's aversion to gunslingers that sent him skedaddling or merely an aversion to half-breeds. In his younger days, the man would have taken offense to such an obvious slight, but now... The man shrugged mentally as he shifted his weight from one foot to the other. Hell, maybe he was just getting too old to give a damn.

He was about to call the bardog for a refill when the boy entered the saloon. The kid was looking for trouble sure as death and hell, the man thought wearily. It was there in the boy's bantam-cock swagger and in the huge old hogleg holstered at his side.

The young gun slinger hesitated just inside the saloon's swinging doors. He was a tall, good-looking kid with corn-colored hair and pale blue eyes. Eyes that darted impatiently from one familiar face to another until, at last, they came to rest on the swarthy countenance of the stranger standing alone at the far end of the bar.

Tall and dark, the stranger had long black hair and a sweeping black moustache, high cheekbones, a stubborn jaw, and a hawklike nose. A .44 Colt with plain walnut grips rode easily in a worn holster tied low on the man's right hip. He was dressed in faded black levis and a blue wool shirt, and at first glance looked pretty much like any other drifter save for the fringed, knee-high moccasins that hugged his long muscular legs.

The boy frowned, experiencing a momentary twinge of gut-wrenching disappointment. He had come looking for a famous gunslick, not some dusty drifter; had expected to find his man attired in rich black broadcloth and white linen, and sporting a pair of matched .44's with creamy ivory or lustrous mother-of-pearl inlays.

The boy was about to turn away in disgust when he noticed the man's eyes— cold and gray, as deadly as the sixgun on his hip, as restless as the wind in the high country. A killer's eyes, the boy mused with a faint smile of satisfaction. Hooking his thumbs in his gun belt, he sauntered over to stand in front of the stranger.

"They say you're fast," the boy drawled. "The fastest around." There was an open challenge in the boy's tone, a subtle shading of the words that implied the boy was faster and eager to prove it.

The man's eyes narrowed to mere slits as he studied the boy, taking note of the well-cared for gun and fancy hand-tooled holster, the cut of his clothes, and the expensive cream-colored Stetson.

Spoiled rich kid, he mused to himself. Aloud, he said, "Go away, boy. I've no time to play with children."

The implication that he was less than a man brought a quick flush of anger to the boy's cheeks. His right hand came up, hovering dangerously close to the butt of his gun.

With the mention of the tall man's name, a hush fell over the crowded saloon. Dancer! The man who had outgunned George Buck and cut down all three of the Trenton boys. Hot damn! Men standing nearby hurried to the far side of the room, their faces betraying a mixture of fear and awe as they scrambled out of the line of fire.

Dancer stepped away from the bar, his hands dangling loose at his sides, his manner cool and unruffled.

When he spoke, his voice was soft, almost gently, strangely at odds with the cold fire in his gray eyes.

"Listen to me, boy," he said. "I don't draw on kids. If you need to prove your manhood, go find yourself a woman."

"I didn't know you were a coward," the boy taunted.

"A yellow-bellied, crow-eating coward!" the boy went on in the same impudent tone.

A muscle twitched in the big man's jaw. It was the only visible sign of the tension building within him.

How many times, he wondered, how many times had he stood poised to strike? He had lost track. Some said he had killed more than twenty men, and he supposed they could be right. It might easily have been more. Only some men lost their nerve when they gazed into his flat gray eyes. Lost their nerve and backed away, deciding humiliation was better than death.

But not the boy. He was out for blood.

"I'm gonna throw down on you, Dancer," the boy vowed. "And if you don't make your move, I'll gun you down like the yellow, half-breed bastard you are."

The boy's verbal assault sent a shocked gasp rolling through the crowd, and then there was only silence as all eyes in the saloon focused on the life-and-death drama being played out at the end of the bar.

For stretched seconds, the boy and the man faced each other. Then the boy's hand streaked toward his gun, freeing it from the holster, raising it to fire.

But the man was moving, too. Smoother, faster, with the ease that came from years of practice.

Afterward, no one remembered seeing him draw. There was only a blur, quicker than the eye could follow, and then the .44 was in the man's hand, a part of him, belching fire and blue smoke, and the boy lay dead on the floor, his life's blood oozing from a neat hole in his chest.

"Right through the heart," murmured one of the onlookers.

"Wait til I tell old Zack I saw Dancer in action!"

The half-breed's narrowed eyes swept the room, choking off the excited babble of voices.

"I gave him his chance," Dancer said evenly. "I let him make the first move."
His hands were moving quick and sure as he spoke, punching the spent cartridge from the loading gate, replacing it with a fresh round before he eased the Colt back into his holster. That done, he crossed the room in long, easy strides, exiting through the batwings without a backward glance.

No one followed him.

"I seen Dancer in Wichita," remarked a grizzled old-timer, addressing no one in particular. "I was there the day he outgunned the Trenton boys. Yessir, he dropped two of them before they cleared leather. He got the third one, too, right between the eyes."

"Somebody better hot-foot it out to the J Bar C and tell old man Clayton what happened," the barkeep suggested. "He ain't gonna like this a'tall."

Several men nodded in agreement, but none of them seemed anxious to leave the saloon's protective walls.

"He's goin'," announced a youthful-looking cowboy, and several men glanced toward the door as the sound of hoofbeats reached their ears.

And now the men in the saloon began to move, clustering around Johnny Clayton's body as they rehashed the shooting, sidling up to the bar to finish their drinks or to order fresh ones.

As the hoofbeats died away, one of the men ventured outside. It was a long ride to the J Bar C, but perhaps J.D. Clayton would be grateful to hear a detailed description of how his boy was gunned down.

Grateful enough to offer a monetary token of appreciation. After all, Judge Clayton was the richest man in the whole damn territory.