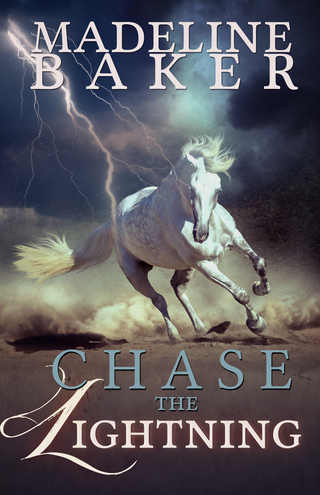 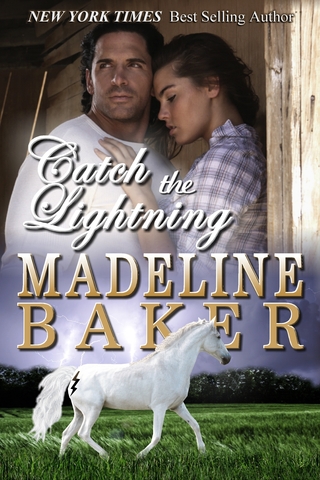 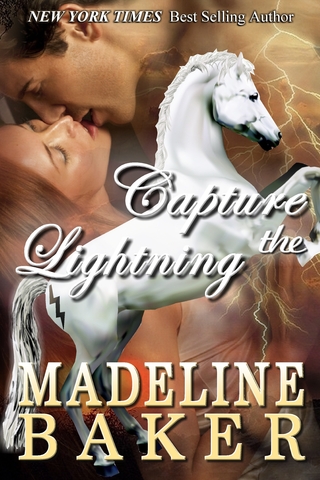 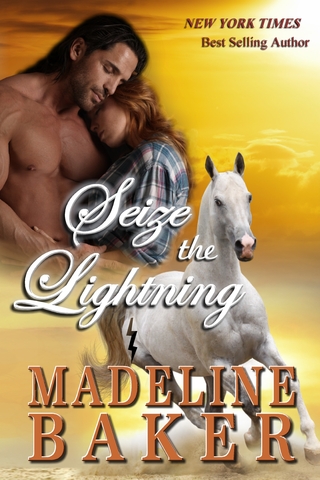 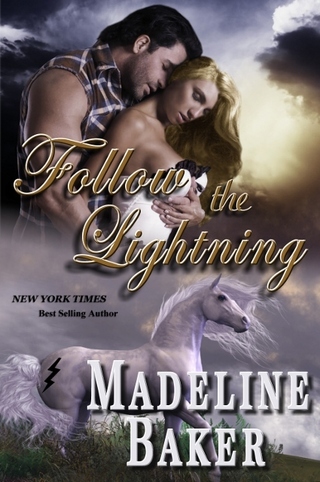 Jenna McLaughlin loves the West, loves the ranch her father wrested out of the wilderness. Even after her mother returns to the east and her father passes away, even after her brother runs off and leaves her alone, Jenna refuses to give up the land she loves.

Jay Dalton is a half-breed with a price on his head. Wounded and fleeing for his life, he huddles at the bottom of a ravine and prays to the Great Spirit for help. It arrives in the form of the magical white stallion, Relampago, who carries Dalton from the present into the past.

Jenna is alarmed to find a wounded man in her yard. Reluctant to help a stranger, yet reluctant to turn him away, she takes him in and nurses him back to health.

The attraction that blooms between them soon turns to love and wishes of forever. But is Jay in the past to stay? Or will Relampago return him to the present where he belongs?

The mystical white stallion, Relámpago, stood atop the mesa, tail idly swishing at a fly. Below, the Lakota horse herd grazed on the lush spring grass that covered the valley floor. His favorite mare rested in the shade of an old oak, her filly sleeping at her side. Last year’s colt frolicked with the other yearlings.

Though the stallion lingered with the herd, he did not belong to the Lakota. Or the Arapahoe. Or the Cheyenne. But he was well-known among the tribes. Most had stories and legends of the mysterious white stallion with the lightning streak on his hip.

To the Apache, he was a spirit horse; to the Lakota, he was a ghost horse because of his pale color. In reality, he was both. And neither. Blessed by the Great Spirit, he wandered the shadowy path between the past and the present, saving countless lives, bringing lost souls together.

Many warriors had tried to capture him. All had failed. No mortal could rope the wind. No mortal man could capture Relámpago unless the stallion allowed it.

A breeze carried the whisper of distant voices, voices only the stallion could hear.

It was not an Apache warrior that needed saving this time. Or a young girl contemplating suicide. Or a woman looking for love in all the wrong places.

But two needy souls meant to be together, separated by time and circumstance.

With a toss of his head, the stallion turned away from the herd. He was needed elsewhere.

Jay Dalton was on the run, but that was nothing new. He’d been running all his life – from an abusive step-father, from a past he longed to forget, and, more recently, from a well-deserved reputation as a con man. At the moment, he was dodging bullets. He glanced over his shoulder as he darted across a dusty street. Dammit, they were still chasing him.

He scanned his surroundings. Taking the bank in this backwater town should have been easy. Hell, the place looked the way it had two hundred years ago. A few of the businesses even had hitch racks in front of them.

But there was nothing old-fashioned about the men chasing him, or their weapons.

He uttered a vile oath as a bullet whizzed past his ear. Shit! It was going to be his last job. He sprinted around a corner.

His car was at the other end of town. But there was a fine-looking horse across the street.

Running for all he was worth, Dalton grabbed the reins, vaulted into the saddle, and lit out for the wide open spaces beyond the town. If he could make it into the wild country, he might have a chance.

The angry shouts of the men chasing him rang in his ears as he high-tailed it out of town. Drawing his Glock from his waistband, Dalton fired back. At this range, on horseback, he doubted he’d hit any of his pursuers, but maybe knowing their quarry was armed would slow them down.

He heard the sound of hoof beats pounding behind him, the roar of an engine, the bark of a high-powered rifle.

Slamming his heels into his mount’s sides, Dalton headed for the roughest ground he could find.

He grunted when a bullet plowed along his left side, cursed when the mare went down. He flung himself out of the saddle, gasped with pain as he tumbled head over heels down a steep, rocky hillside, rolling over and over again before coming to rest inside a tangled mass of shrubbery at the bottom of the hill.

Lying there, semi-conscious, with blood pouring from the wound in his side, Dalton stared up at the vast blue sky. He needed a miracle, he thought as he watched the clouds drift by. He must be delirious, he mused, because one of the clouds looked like the great white stallion his maternal grandfather had told him about, endless tales of Relámpago, the elusive ghost horse of the Lakota people. The stallion had saved more than one Lakota warrior, his grandfather had said. A man had only to believe.

Dalton snorted softly. If only those stories were true. But he wasn’t a warrior. He might have been, he thought bitterly, if he’d been born in another time and place.

The rumble of an engine penetrated the fog of pain that engulfed him.

His luck had run out.

His pursuers had found him.

Only a miracle could save him now.

Muttering, “Where’s that damn stallion when you need him?” Jay Dalton closed his eyes.

A warm breath moved across Dalton’s face. Cracking his eyes open, he squinted into the sunlight. Was that a horse standing beside him?

With a black zigzag, like a lightning bolt, on his flank.

“Relámpago.” Like a prayer, the name whispered past Dalton’s lips.

Whinnying softly, the stallion dropped to his knees.

Muttering, “I sure as hell hope I’m not hallucinating,” Dalton closed his eyes. When he opened them again, the stallion was still there.

Grabbing a handful of the horse’s mane, he pulled himself onto the stallion’s back. Pain speared through his side as the horse scrambled to its feet and lined out in a dead run, headed due west.

Gunshots buzzed like angry hornets around Dalton’s head when they reached the top of the of the rocky hillside. He winced as one grazed his left temple.

It was the last thing he remembered.