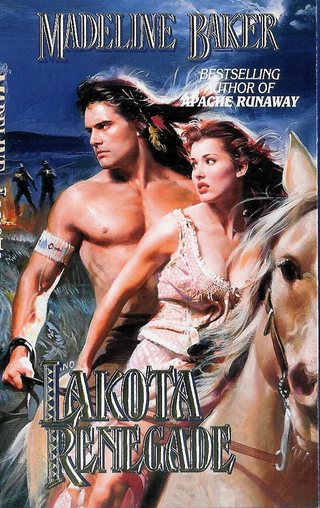 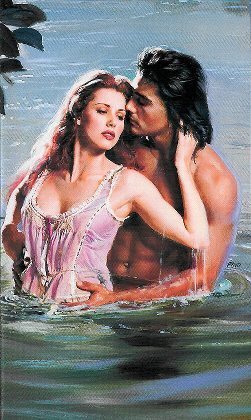 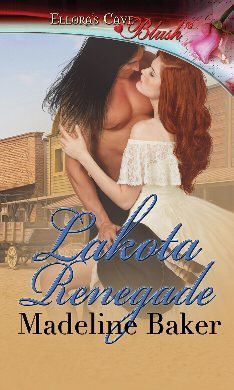 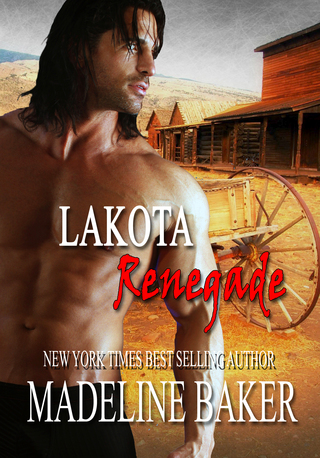 Handy with six-guns and fists, Creed Maddigan liked his women hot and ready. But the rugged half-breed wasn’t used to innocent girls like Jassy McCloud who curtsied and made ginger snaps. Then Creed was falsely jailed for a crime he didn’t commit, and he could think of nothing besides escaping to savor Jassy’s sweet love.

Alone on the Colorado frontier, Jassy could either work as a fancy lady or hope to find a husband. But what was she to do when the only man she hoped to marry was a wanted renegade? For Jassy, the decision was simple: she’d take Creed for better or worse, even if she had to spend the rest of her days dodging bounty hunters and bullets.

Creed Maddigan stood on the porch of Gratton's Mercantile, his right shoulder propped against the white-washed upright that supported the sloped overhang of the general store, his left hand resting negligently on the ivory handle of the Colt holstered on his left hip.

He swore under his breath, his eyes narrowing as he watched the confrontation taking place in the narrow alley that ran between the rear entrance of the general store and the row of shoddy two-room shacks where most of the town's prostitutes lived.

Shacks was a flattering description at best, he mused. Most were made of inferior lumber and tar paper. He'd only been back in Harrison a couple of weeks, but he'd heard there was a big push by some of the local ladies to have the shacks torn down and their occupants run out of town.

Maddigan grunted softly. He didn't spend enough time in Harrison to care what happened to the town or its lightskirts.

Truth be told, he didn't spend much time in any one place, although he had a permanent room in the hotel. It gave him a place to hole up when he wanted to be alone, and a mailing address so people interested in hiring his services could get in touch with him without too much trouble. The room at the Harrison House was the closest thing he'd had to a home in the last ten years.

The argument in the alley was getting louder now as three boys who appeared to be seventeen or eighteen years old continued to harass a red-headed girl who looked to be several years younger.

Creed frowned as they teased her about the color of her hair, about the fact that her mother and her older sister worked the cribs in the Lazy Ace Saloon across the street.

Tears formed in the girl's eyes as the tallest boy shoved her up against the wall, his body pressing suggestively against hers.

"One kiss," he cajoled. "That's all." He nodded toward his two companions. "One kiss for each of us."

The other two boys grinned and punched each other on the shoulder.

"No, Harry!" The girl jerked her head aside when he tried to cover her mouth with his.

"Come on, gal, give me a little kiss," Harry demanded. "My dad told me you'll be working in the saloon in a couple of months anyway."

"No!" Struggling to free herself, the girl drove her knee into the boy's groin. It was a direct hit and had the desired effect.

Yelping with pain, Harry doubled over, his hands cradling his injured manhood.

The girl tried to dart past him, but Harry's hand snaked out and grabbed her by the arm. He hung onto her in spite of her wriggling. Waiting, Creed knew, for the worst of the pain to pass.

And then the boy slapped her. Hard. Twice.

Trent glanced at Harry and the girl, and then, apparently deciding that what had started out as a lark wasn't fun anymore, he followed Billy down the alley.

From the porch, Creed shook his head. If only the kid
hadn't hit her.

Disgusted with himself for what he was about to do, he pushed away from the upright and vaulted over the porch railing.

Jassy McCloud gasped as the tall, black-clad man jumped the railing and dropped lightly to his feet. She had seen him before. You didn't forget a face like that. He had been a frequent patron at the Lazy Ace Saloon during the last few weeks. She had heard all kinds of stories about him from her mother, and from her sister, Rose. Maddigan, his name was. Creed Maddigan. He was a loner, a fast gun with a formidable reputation. A man without pity or mercy. It was rumored he was half Sioux Indian. Some said he'd even taken a scalp or two.

Now, seeing the determined expression on his face, Jassy believed every lurid story she had ever heard.

Afraid the gunman had come to help Harry Coulter, Jassy tried to wrest her arm out of Harry's grip.

Unaware of the man coming up behind him, Harry swore at Jassy, cussing her with all the finesse of a hard rock miner, only to fall silent as Creed Maddigan's fingers closed over his shoulder like the hand of doom.

Jassy stared up at the half-breed, surprised that he had come to her rescue. She tried to pull away from Harry again, but he kept a firm grip on her arm.

The gunman's hold tightened on Harry's shoulder. "Let her go."

Creed yanked Harry around so they stood face to face. "That's better. What's your name?"

"You think it's fun, hitting girls?"

"Go on, get out of here," Creed said, giving the boy a shove. "If I ever see you picking on her again, I'll break your arm. Do we understand each other?"

"You'll be sorry for this," Harry said, his hand massaging his cheek.

"He'll what?" Creed took a step forward, his stance fraught with menace.

"Nothing," Harry muttered. He shot a fulminating glance at Jassy, then turned and ran down the alley.

Creed's gaze moved over her in a long assessing glance. She was a little bit of a thing, with huge brown eyes. She wore a baggy blue dress that looked to be several sizes too large, and a pair of ugly black shoes badly run down at the heels. Her hair, as red as autumn leaves, was pulled back from her face and tied at her nape with a narrow black ribbon.

"You sure you're all right?" Creed muttered, thinking she looked awfully scrawny in that hideous dress.

Jassy nodded again, unable to draw her gaze from his. His eyes were as black as the finely woven shirt stretched taut over his broad shoulders. He was tall and lean, with skin the color of her mother's old copper kettle.

Jassy blinked up at him, mesmerized by the sound of his voice. It was deep and soft, almost gentle. "Jasmine Alexandria McCloud. And I'm not a girl. I'm a woman."

Creed grinned. The name was bigger than she was.

"Most people call me Jassy."

It suited her, he thought, right down to the ground. "You'd best go on home, Jassy girl. And stay out of alleys from now on, hear?"

To his amazement, she dropped a proper curtsey, then ran across the street and up the outside stairway of the Lazy Ace.

With a rueful shake of his head, Creed resumed his place on the porch, a wry grin twisting his lips as he thought of that little bit of a girl curtseying to him like he was somebody.

Creed swung his legs over the side of the bed, grimacing as his hand rubbed his left thigh. The wound, inflicted by the last man he had hunted down, was only half-healed, and still tender.

Reaching for the Colt hanging on the bedpost, he crossed the room, wondering who would be knocking at his door at this hour of the morning. He didn't have any friends in town, at least none who'd be out and about this early in the day.

With his thumb poised over the hammer of the Colt, he unlocked the door to find Jassy McCloud standing in the hallway. He wouldn't have been more surprised if he'd come face to face with Saint Peter.

"What the hell are you doing here?" he asked.

"I..." A wave of color swept into Jassy's cheeks. "I just came by to... to thank you for what you did yesterday." She thrust a napkin-covered plate at him. "I made these for you."

Frowning, Creed shoved his Colt into the waistband of his pants. Taking the dish from her hand, he lifted the cloth.

"Ginger snaps," she said shyly. "I hope you like them."

It was all he could do not to laugh out loud. Cookies! He was a hired gun on the down side of twenty-seven and she brought him cookies. "Thanks."

Jassy stared up at Maddigan. It was obvious she'd gotten him out of bed. His hair, as black as his reputation, was sleep-tousled. The beginnings of a beard shadowed the firm, square line of his jaw. He wasn't wearing a shirt or shoes, and she experienced a funny fluttering sensation in the pit of her stomach as her gaze moved over him, imprinting images in her mind: Finely chiseled lips. Prominent cheekbones. A broad slash of a nose. Well-muscled shoulders and arms. A deep chest sprinkled with curly black hair. A flat stomach ridged with muscle. Slim hips. His skin was the same copper color all over, not just where the sun had touched him.

He was, without doubt, the most handsome man she had ever seen. And he'd been kind to her. Suddenly, impulsively, she wanted to know him better.

Creed endured the girl's scrutiny in amused silence. A lot of women were fascinated by his reputation and the color of his skin. He'd seen that same appraising look countless times before. Only Jasmine Alexandria McCloud wasn't a woman, just a kid who probably didn't realize what that look inevitably led to.

Jassy dragged her gaze from Maddigan's rugged physique and glanced up and down the hall, hoping no one would see her standing outside a man's room so early in the morning, knowing what conclusions were sure to be drawn.

Jassy swallowed hard. "Can I come in?"

Creed's eyes narrowed thoughtfully. That young pup, Harry, had said the girl's mother and sister both worked at the Lazy Ace. Maybe the girl was older than she looked. Maybe she was hoping to get in a little practice before she took her place in one of the cribs, but it wouldn't be with him. He'd never cared much for robbing cradles.

Jassy glanced past him, catching a glimpse of an unmade bed. The rumbled sheets reminded her of what her mother did for a living; suddenly going into a man's room didn't seem like such a good idea after all.

"I...thanks again," she stammered, and almost ran down the hall.

Creed watched her round the corner, then stared at the plate in his hand.

He was still grinning when he closed the door.