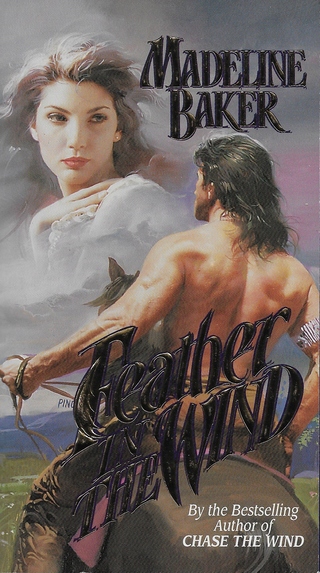 ROMANTIC TIMES said: Though FEATHER IN THE WIND is action-packed and rich with passion, treachery and justice, fans of Ms. Baker's traditional western romances may feel that her classic novels were more emotionally moving than this departure into the paranormal.

Synopsis Susannah saw his face in a faded picture, and his eyes seemed to call to her. It was said that he'd been hanged nearly a century ago for kidnapping a white woman, yet his story seemed unfinished. To the writer in her, he was an inspiration, but to the lonely woman within, he was a dream come true who would lure her across the years to fulfil a love beyond time.

READERS SAID:
Rave Reviews 5 stars
Romantic, mysterious, chilling, sensual, tragic,  triumphant
by Anonymous on November 18 2003
This book is all of those things and more.

Madeline Baker succeeds in making your own romantic fantacies come to life in this book. Her leading lady, Susannah, is such a real woman of the late 90's that you can almost pretend the story is about you. She has the same habits, likes and dislikes, hobbies, and tastes as you or any of your friends. She loves to read romance novels and dreams of meeting a "Mr. Right" like those in the stories. (Sound familiar?)

Susannah attends a powwow in Orange county, CA. There, she meets an old indian who gives her an eagle prayer feather. He insists that she take it without paying for it, saying that it is meant to be hers, and that if she prays with it her dreams will come true.

Susannah wakes up in an army camp in South Dakota, in the year 1870. There, she sees him for the first time. Tata Sapa (Black Wind) is a prisoner serving 3 years hard labor for stealing a cow to feed his people. He recognizes Susannah right away as the woman he had seen in a vision 6 years earlier. Susannah recognizes him as the indian who was in an old photograph she had purchased back in her own time period. Each night she sneaks to his cell, where they gaze at one another in amazement. Sparks fly and she helps him escape. This is only the beginning of the story. Now, the real adventure begins.

Susannah and Black Wind travel around South Dakota. They make friends with an elderly white couple, rejoin Black Wind's Lakota tribe for a short time (Susannah isn't welcomed with open arms), marry in their own private ceremony, live privately near a waterfall, attempt to make peace between the Lakota and the "blue coats", and face imprisonment by the army together.

Will they escape prison and hanging? You'll have to read the book to find out.

These are just a few highlights of this amazing story. There is so much more. The book is 395 pages, and never once gets boring.

The love scenes are very tame, but so romantic. Susannah, being a woman of the 90's, is not a doe- eyed virgin. She teaches Black Wind how to kiss like white people do. Black Wind is an eager student.

The book involves many likable characters who make you smile, and plenty of "bad guys" to keep the story exciting.

* * *
Prepare to be drawn into a forbidden yet passionate romance that transcends imagination, time and ethnic boundaries.

The destiny of both the lovely, white skinned Susanah (a 90's author with the "heart of a warrior") and the regal Black Wind (a magnificent Lakota warrior from 100 years in Susanna's past) become entwined in the mists of an old man's vision, a powerful prayer feather and a timeless love that reaches across 100 years of legend and dreams to help one of the last great warriors keep a promise to his people.
Excellent
by Anonymous on May 10 1997

this was an excellent book, and as i thoroughly enjoy reading madeline baker
anyway, i bought this book at a store a few years ago. i have not forgotten it. the enjoyment i got out of reading it was worth the money i paid for it. i bought it new...and still have it. as a matter of fact i think i shall read it again. i have already read it at least twice.
by rose vinson on October 04 2003

* * *
I love anything written by Madeline Baker and this book is no exception. It was Romantic, exciting and just plain sexy. I loved the hero and heroine they were so in love even time couldn't keep them apart.
by Melissa Fitch on August 29 2005

Very Good Read
Good from beginning to end. I like my romances a bit more sensual with longer love scenes, but Madeline Baker's writing makes up for it.
by Jean D. Georges on April 14 2007

"Prepare to be drawn into a forbidden yet passionate romance that transcends imagination, time and ethnic boundaries.

The destiny of Susannah (a 90's author with the 'heart of a warrior') and the regal Black Wind (a magnificent Lakota warrior from 100 years in the past) become entwined in the mists of an old man's vision, a powerful prayer feather, and a timeless love that reaches across 100 years of legend and dreams to help one of the last great warriors keep a promise to his people."
By Anonymous 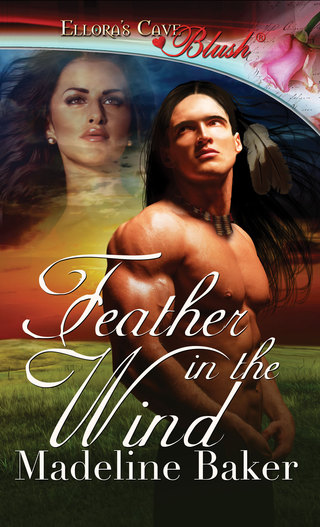 FEATHER IN THE WIND 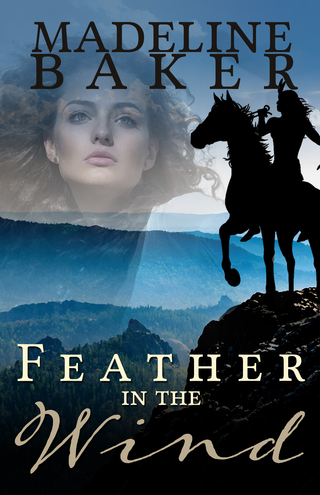 Black Wind
He gazed out over a land as vast and empty as the sky, praying for the strength to guide his people, and he saw her face. She came to him in a vision, a woman as mysterious as the new moon over the prairie, as tender as springtime in the Paha Sapa. And he knew his life was changed forever.

Susannah
She saw his face in a faded picture, and his eyes, restless as the wind, seemed to call to her. It was said he’d been hanged nearly a century ago for kidnapping a white woman, yet his story seemed unfinished. To the writer in her, he was an inspiration, but to the lonely woman within he was a dream come true who would lure her across the years to fulfill a love beyond time.

Tate Sapa stood alone at the foot of his mother's burial scaffold, his arms extended over his head, reaching upward in supplication as he pleaded with the Great Spirit for guidance. The eagle feather he wore on a rawhide loop around his wrist fluttered in the faint breeze that whispered over the holy mountain.

Tate Sapa lifted his voice to the heavens in mighty prayer, pleading for the welfare of his people. The old ones had lost hope, the women were discouraged and tired, the children were hungry and afraid. And the young men...

As always, the young men were eager for war, anxious to prove their bravery in battle, to count coup on the enemy. The blood of their parents, their wives and their children, watered the ground, crying out for vengeance against the Blue Coats.
The hearts of the young men were filled with anger, with the need to fight, to seek vengeance for the wrongs inflicted upon the people by the wasichu.

Tate Sapa understood their anger. His blood burned as hotly as theirs with the need for revenge. He, too, had lost loved ones. His gentle mother, his young sister, both had fallen before the soldier coats in the last battle. And yet, as much as he yearned to lead the warriors into battle, to ease his anger by shedding the blood of his enemies, Tate Sapa knew war was not the answer. The time to fight had past. The Lakota were brave warriors, fearless in battle, but their numbers grew smaller each year, while the wasichu seemed to be as numerous as the blades of grass that covered the prairie in summer. The Lakota did not have an endless supply of weapons and ammunition and young men.

The fate of his people rested heavily on his shoulders. "Help me, Wakan Tanka, show me what I must do."

He stared into the sun, oblivious to the chill in the air, to the cold wind that sent shivers down his spine. He had been three days without food and water. Hunger gnawed at his belly, his tongue felt thick in his mouth, his throat dry as a buffalo wallow in summer.

Weak with hunger, burdened by despair, he dropped to his knees and bowed his head.

"Help me, Wakan Tanka," he cried softly. "Help me lest I perish."

Hands resting on his thighs, Tate Sapa stared into the distance, listening to the wail of the winter wind as it howled across the mountain top. His home was here, in the heart of the Paha Sapa. Indeed, this land was the heart of his people. Stretching away from the sacred hills lay a land as empty as the sky, patchy with buffalo grass, sharp green cactus and sage. But the Hills themselves abounded with life - deer, elk, porcupines, beaver, badgers, squirrels. The wolf and the bear made their home in the sacred Hills. Once, pte had roamed the prairies, the great buffalo herds causing the very earth to shake as they passed by. But the wasichu had hunted the shaggy beasts relentlessly until there were only hundreds where there had once been countless thousands.

It was one more reason why he hated the whites. They killed the buffalo indiscriminately, taking the hides, sometimes the tongue and the tail, leaving the meat to rot in the sun.

He shivered as the day turned suddenly dark. Looking up, he saw black clouds racing across the sky. Thunder shook the earth beneath him; lightning crackled overhead.

And there, between one lightning burst and the next, he saw a vision of a white woman, saw her as close and as clearly as if she had been standing before him. She had dark brown eyes, a generous mouth, a fine straight nose, and lips redder than any he had ever seen. Curly brown hair fell to her shoulders. The shirt she wore was white, with long full sleeves, the pants were snug blue denim that emphasized every feminine curve. In her hands, she held a piece of paper, and on the paper he saw his own likeness, clearly drawn.

He stared at her, at his image, in astonishment, wondering how a white woman had captured his likeness. What did it mean? What cruel trick were the gods playing on him, to send him a vision of a white woman when he had come seeking their help?

A bolt of lightning sizzled across the sky, the brightness blinding him, and in those few seconds when his sight was gone, a kaleidoscope of disjointed images flashed through his mind - Blue Coats plundering a Lakota village, an iron-barred house, a noose swinging in the wind, bodies lying broken and bloody in a green valley, and over all, the face of the white woman, her dark brown eyes filled with tears...

In the blink of an eye, the images were gone, the sky was clear, and the sun was shining as before.

Rising to his feet, Tate Sapa fastened the eagle feather to the scaffold that held his mother's remains. He stood there a moment and then he began the treacherous climb down the mountain, the woman's image imprinted in his mind, his heart heavy with the knowledge that, in some way he did not understand, his life had been forever changed.