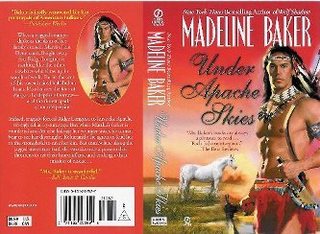 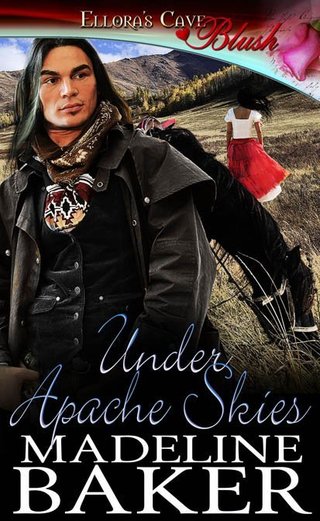 Romantic Times said:
Baker writes with excitement. Her characters are exhilerating, adding lots of spark to her well-developed, fast-paced plot.

Under Apache Skies was a wonderful book. Its characters' are strong heros and heroines alike. I like how Madeline made two love stories into one.

Martha Jean and Dani lived in the Wild West but they were sisters that were like night and day. Marty wore the pants in the family her father Seamus Flynn expected so much more from her than her sister Dani. Dani took care of the house and made sure meals were on the table she did everything a lady was suppose to. Marty could brand and castrate cattle with the best of them.

Then there was one fateful event where someone killed Seamus and left his daughters to fend for themselves. Marty made sure that she didn't fall apart— she had to be strong for her sister Dani just like she always did even when their mother took off years before and left the girls alone with their father. Of course Marty could have cared less but Dani stilled missed her.

Along came Ridge Longtree, gunslinger and half Apache. When she saw him comforting Dani after her father's death, Marty couldn't understand the emotions bringing them together. What she didn't realize is that Ridge didn't have designs on Dani, he only had eyes on her.

The events of this book had you reading and reading not realizing how engrossed you became in the storyline. Madeline has just the right amount of adventures and mystery to peak the interest of the reader. It is a book that makes you feel good and enriched in history. Loved the plot and the story!

Nite Owl Reviews said:
Madeline Baker has been around for a while and there is a reason for that! She is just plain good!!!! Known for her Indian romances, Ms. Baker has a gift for storytelling. Under Apache Skies tells of Martha Jean Flynn, a young woman who runs the household and is in charge of her younger sister Dani. When Ridge Longtree happens by on her homestead, her father comes up missing. When Ridge finds her father dead, it sets the two on a journey of love and loss.
With strong characters, and memorable secondary characters in the sister and the Apache Sanza, Under Apache Skies is a read from a Top Notch Writer!

Romance Junkies said:
Ebook edition
4 stars
Ridge Longtree has made his name as a highly regarded gunfighter. He finds that he is tired of the killing, and having no place to call home. He happens upon the ranch of Martha Jean Flynn and her sister Dani. He recognizes that they are unsure of his intentions, but allows him to stay in their bunkhouse.
Martha knows that Ridge is not your normal ranch hand in search of work. In his eyes she sees an edge you don’t normally find in your typical man. His air of mystery heightens her womanly senses.

When Martha’s father's horse returns blooded and without a rider, she fears for the worst. She hires Ridge to go in search of her father. Ridge is able to locate Martha’s father, but it is too late to save him. He returns to the ranch with the grim news of his death.

Martha believes that her father was murdered, and she wants to seek out the person responsible for his death. Then her world once again goes spinning out of control when her sister is kidnapped by Apache.

Ridge can’t stand to see Martha so distraught over her sister’s disappearance. He agrees to lead her into Apache territory to rescue her. As the two journey to find her sister, the close quarters results in them falling in love.

Will Ridge and Martha be in time to save Dani? Or will they be shocked to discover her living circumstances?

Fans of Madeline Baker will rejoice at another award winning novel in UNDER APACHE SKIES. You can almost feel yourself being projected back to the Native American culture each time you pick up one of her books. Once again, she proves that she reigns supreme as the Queen of the Historical romance genre.
Suzie Housley

Romance Fans said:
When a rugged stranger darkens the door of her family ranch, Martha Jean Flynn can tell right away that Ridge Longtree is nothing like the other cowboys who show up in search of work. For in the eyes of this raven-haired, half-Indian loner, Martha sees the hint of danger, the depths of sorrow—and the tiniest spark of untold passion.

Indeed, tragedy forced Ridge to leave the Apache stronghold at a young age. But when Martha’s father is murdered and Apaches kidnap her younger sister, he cannot bear to see her distraught. Reluctantly, he agrees to lead her to the stronghold to save her kin. But somewhere along the jagged mountain trail, the two discover a passion that threatens to set their hearts aflame and endanger their mission of rescue…

Madeline Baker has always been one of my favorite historical writers and she does not disappoint with this tale of two worlds coming together during hard times and finding love. This book has every aspect you would look for in a story from the strong characters to the romance and you may find yourself even sniffling a couple times. This book is in Ellora’s Cave Blush genre which means the romance is just that romance.
Reviewed by Annette 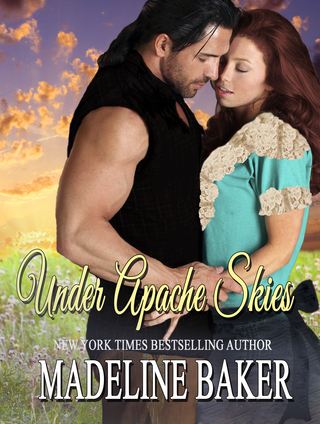 When a rugged stranger darkens the door of her family ranch, Martha Jean Flynn can tell right away that Ridge Longtree is nothing like the other cowboys who usually show up in search of work. For in the eyes of this raven-haired, half-Indian loner, Martha sees a hint of danger, the depths of sorrow—and the tiniest spark of untold passion.

Indeed, tragedy forced Ridge Longtree to leave the Apache stronghold at a young age. But when Martha’s father is murdered and Apaches kidnap her younger sister, he cannot bear to see her distraught. Reluctantly, he agrees to lead her to the stronghold to save her sister. But somewhere along the jagged mountain trail, the two discover a passion that threatens to set their hearts aflame—and endanger their mission of rescue...Under Apache Skies

The sound of gunfire rolled through the early morning air like summer thunder. Muttering an oath, Ridge Longtree holstered his Colt. He hadn’t wanted to kill the kid, but the young would-be gunman hadn’t given him any other choice.

Swinging onto the back of his horse, Longtree urged the big black stud into a lope. The shocked faces of a young mother and her little girl flashed by in a blur as the black raced down the dusty main street, headed for the open prairie beyond.

So much for hanging up his gun and settling down. He had lost track of the men he had killed, the times he had tried to settle down, only to have some young gunsel discover who he was and push him into a showdown. The results were always the same…a blast of gunfire, the stink of death, a quick exodus from whatever town he was in at the moment.

In the beginning, he had relished the thrill of it, the exhilaration of pitting the speed of his draw against that of another. He had lived for the quick rush of fear and excitement as he put his life on the line. But now…hell, now he was just tired of it all.

The black slowed of its own accord after a few miles and Longtree let the horse set its own pace. Lost in thought, he paid little attention to the direction the stud was taking other than to note that they seemed to be drifting west.

Drifting, he mused. That was all he’d done in the last twelve years, just drift, like some rootless tumbleweed. Of course, for a man who had no ties, and no place to settle down even if he was of a mind to, there wasn’t much else to do but drift.

Good whiskey, easy women, and bucking the tiger, those had been his main pursuits since he left home. Somewhere along the way, he had discovered he could draw and fire a gun in the blink of an eye. In addition to being shit fast, he was possessed of an uncanny knack to hit what he aimed at. He had been pushed into killing his first man.

He had been young and impulsive at the time, quick to anger, quick to take offense when someone called him a low-down dirty half-breed. Until that fateful night, he had never fired his Colt at anything more dangerous than jack rabbits and empty beer bottles. But that night, goaded into a showdown, he had drawn his gun and killed a man. He would never forget that night, the recoil of his Colt, the quick flash of muzzle fire, the acrid stink of gunpowder. The sickly sweet coppery smell of blood that had overpowered everything else.

His first reaction was that he was glad he wasn’t the one laying face down in the dirt. It was only later, after the first rush of adrenaline had passed, that the full impact of what he had done hit him.

He had killed a man only a little older than himself.

He had been arrested and spent the night in jail, only to be released when witnesses declared that Ridge had fired in self-defense. During that one night in jail, he had discovered that he had a powerful dislike for being locked up in small spaces.

He had seen the grief he had caused at the funeral three days later, seen it in the eyes of the young man’s mother and father, in the tears that flowed down the cheeks of the boy’s intended bride. He had heard the sorrow in the voices of those who had been the young man’s friends.

Muttering an oath, Ridge thrust the memory from his mind. He had killed a dozen men since that first one and in doing so, he had made quite a name for himself. His reputation followed him from town to town, as relentless as his shadow. There was no way to outride it, no way to get shed of it. It stuck to him like a bur to a saddle blanket.
In time, he had learned to live with it.

It was near dark when he spotted the house, a sprawling two-story place located in a shallow valley. There were a couple of peeled pole corrals filled with horses on one side and a big red barn on the other, along with a bunkhouse, cookhouse, and springhouse.

Several tall trees shaded the front porch. A long plume of smoke spiraled from the chimney of the main house and even as he watched, lights appeared in the windows.

The place looked downright prosperous. Prosperous enough to maybe give him a place to bunk down for the night.

Clucking to the black, he rode down the hill.