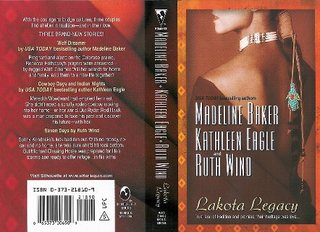 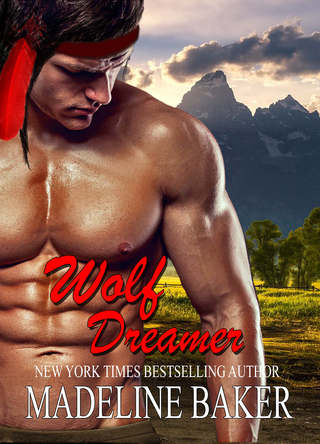 Pregnant and alone on the Colorado prairie, Rebecca Hathaway's prayers were answered - by rugged Wolf Dreamer.

Will her search for home and family lead them to a new life together?

She stood on the edge of a high mountain meadow, hiding behind a tree, captivated by the sight of a tall copper-skinned man dancing in the cool silver glow of a full moon, his waist-length hair his only covering. He chanted softly as he danced, his voice low, the words foreign to her ears, his steps graceful, elegant, intricate. She had watched him dance before. Always the same steps, always the same chant. He danced for what seemed like hours, untiring, his voice lifted toward heaven in what she was certain was a prayer.

She watched until her eyelids grew heavy and she sank down to the ground.

It was then that the mist came, rising from the earth, enveloping the dancer in a sparkling golden brown haze.

It was then, between one breath and the next, that the miracle occurred. Copper-hued skin became thick black fur, his body changed, transformed, until the man was gone and in his place stood a huge wolf with golden brown eyes. Lifting his head, he sniffed the air and then he turned, ever so slowly, toward her hiding place.

Startled, frightened beyond words, she leaped to her feet and began to run, her heart pounding, her pulse racing.

He was behind her. She knew it without looking, knew if she dared glance over her shoulder, she would see the wolf chasing her, gaining on her. She ran and ran. Ran until her sides ached, until her legs were weak and she couldn't run any more. With a sob, she fell face down in the tall grass, her heart roaring like thunder in her ears as she felt the wolf’s hot breath blow across her cheek like the hot breath of a desert wind. She tried to tell herself there was nothing to fear, that wolves did not attack humans, but she knew, deep in her heart, that his teeth would soon rend her flesh.

She opened her mouth to scream….

And that was when she always woke up.

He watched her as he did every day, drawn to her, to this place, without knowing why. Crouched behind a screen of tangled vines and wild blackberry bushes, he watched the white woman make her way down to the river. Her name was Rebecca Hathaway and she came here each day just before dusk. Sometimes she swam in the slow current, sometimes she just sat on the grassy bank and gazed into the clear water, her expression pensive, often sad.

He had watched her off and on since she had come here five summers ago as a new bride. He had seen her eyes light with joy as she watched a brown and white calf struggle to take its first step, heard her laughter as she danced in the rain, listened to her sing, her voice soft and sweet, as she worked in the vegetable garden that grew behind the house.

He had watched her belly grow round with child, had listened to her tears when she stood over her husband’s grave. He did not know why the man had died and though it grieved him to see her in tears, he was pleased that she no longer shared her bed or her body with another.

This evening she had again come down to the river to bathe. A low growl rose in his throat as she stripped off her dress and petticoat and stepped into the water.
It pleased him to watch her.

It pained him to watch her.

The setting sun caressed her skin, making it glow like pale gold. Her eyes were the bright green of new grass in the springtime. Her hair, which was the color of the rich dark red earth of his homeland, caught the fading light, emphasizing the red highlights, turning the long silky strands to burnished copper.

She reached for the chunk of homemade hard yellow soap and began to wash. The soap smelled of flowers. The lather slid down her arms, down the valley between her breasts. Watching her, he was sorely tempted to join her there in the river, to feel her skin against his own, to lick the drops of water sliding down her slender neck and rounded belly…

He lifted his head and sniffed the wind, then slowly eased back into the shadows, his nostrils filling with the stink of unwashed bodies.